The Emergency Alert System (EAS) is designed to alert the public of severe weather, technological or terrorism events that are forecasted or occurring.

Why the Emergency Alert System (EAS) is a top priority at Z88.3

That night, Z88.3 provided continuous storm coverage, getting critical real-time tornado warning information out to the eight counties that the 88.3 signal touches. The Emergency Alert System was a critical component that night.

But Z88.3 was fully staffed and broadcasting live during the severe weather event.  ALL the tornado warnings were transmitted over Z88.3 via the Emergency Alert System in real-time.  Z88.3 was one of the few stations to be sounding the warning as a tornado was approaching and tearing through Winter Garden.

In the wee-hours of Monday, February 23rd, 1998, Z88.3 received a call from a family in Kissimmee.  They were calling to thank the Z for their coverage of the severe weather.  They heard the tornado warning for their area on Z88.3, and against conventional safety advice, chose to load the family into a car and drive away to safety.

When they returned home they found that their house had been severely damaged.  They went on to say that if they had not heard the tornado warning on Z88.3, they would have remained at home and the consequences could have been tragic.  This is another reason why Z88.3’s involvement in the Emergency Alert System is so important.

Because of your faithful and generous financial support, Z88.3 has been able to be there with Weather Warnings First®, to help you keep your family safe.

Your giving makes it possible for Z88.3 to continue the ministry of severe weather coverage and participation in the Emergency Alert System.

Thank you for making it possible for the Z to be the voice of hope with emergency weather information for the millions of people who live and come to play in central Florida. 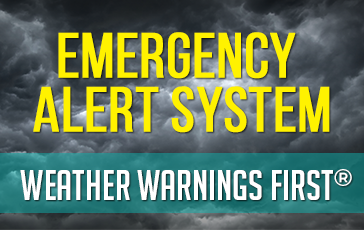